The feeling of Seville is unlike any other city we have visited yet. Bright colored or tiled buildings full of character, warm weather (do not even contemplate about visiting in July or August), and friendly people. Other than the fact that we drove into the nightmare of narrow roads on a busy Friday night, we had a warm welcome to the city and instantly had an affinity for it.

Much to our surprise, the food was a complete contrast to this lovely Southern Spanish town. We thought we were heading into fresh seafood, wonderful produce, tastes of the Mediterranean, but we were so wrong! It seemed as though everything was fried and vegetables were few and far between (Even speaking to a bartender who had moved from Prague over a year ago – she too had the same surprised encounter with the local cuisine).

With almost five days in the city, and a local connection through a friend, we were able to cover a lot of ground. Below are our highlights of our time in Seville.

Eloy Patio – Like everywhere in Seville, ceramic tiles are the décor of choice and this restaurant is no different. Cheap, easy, and quick this tiled stadium seating only spot serves about 25 large montaditios (sandwiches) for about $2.50 each. Overflowing with people at all hours of the day, it is the perfect gathering spot for cheap beers and pretty good bites.

Dos de Mayo – A small bar/restaurant that has been around for years and a local favorite.  The fried little flounders were a wonderful substitute for the boquerones we had now been eating for over a month. Pretty good local dishes and a good value as each item can be ordered as either a tapa(small) or a portion(large).

Pepe Hillo – If you find yourself around the bull ring at lunch, wander down the back street to Pepe Hillo. Bull heads from the local fights over the years are mounted on the restaurant walls. Food was quite good, produce fresh, and relatively inexpensive. We thoroughly enjoyed the roasted peppers with shrimp and stuffed avocado.

Mercado Lonja Del Barranco – New to Seville (and rumored to have been designed by the same architect as the Eiffel tower) this tapas market was very similar to San Miguel Market in Madrid. Filled with jamon bars, oysters, all kinds of paella, wine, beer and every other type of Spanish specialties. A beautiful place to sit near the river and enjoy the perfect Seville weather.

Alhambra – One of the best meals we had in Seville and in a lovely location. From the Chef’s Perspective “We started with Salmorejo, a type of gazbacho, served with a cooked quail egg, jamon, and cherry tomato halves. It was absolutely delicious. I’m very partial to my gazpacho recipe that I got when working at Oceana in NYC, but this was almost as good. The next course was an olive oil cured Manchego cheese with gooseberries, walnuts and candied spaghetti squash. Once again, an amazing combination of flavors – so simple yet so good. For a main course dish, we ordered with a duck lasagna (we found it very interesting on the menu, so we had to try it). Made with lasagna noodles, layered with duck pate and duck prosciutto it was a very imaginative dish. Overall the restaurant was an amazing little find in the heart of a very touristy area”.

Mechela Restaurante – In talking with a French national, now Seville local, at a bar one night (until 2AM!) he recommended this local place, hidden in a back street near the Museo de Bellas Artes. This ended up being another amazing meal while in Seville and the perfect end to our stay. A great wine list complemented the tasty crispy prawn with cashew ajo blanco, razor clams al la plancha, sweet potato gnocchi with smoked sardines and broccoli pesto, and oxtail tajine with couscous and chickpeas.

Plaza Espana – Absolutely beautiful and quite possibly one of our favorite spots in Seville. Built in 1928 to showcase Spain’s industry and technology exhibits during the Ibero-American Exposition. This gorgeous complex is a huge half-circle with buildings continually running around the edge, accessible over the moat by numerous bridges representing the four ancient kingdoms of Spain. By the walls of the Plaza are many tiled alcoves, each representing a different province of Spain. Such a unique space filled with meaning and maybe even a flamenco performance or two!

Reales Alcázares de Sevilla – One of the must-see tourist locations within Seville. This beautiful royal palace was originally developed by Moorish Muslim kings as early as the 1st century and is considered one of the most outstanding examples of mudéjar architecture found on the Iberian Peninsula. The entire palace is covered in bright ornate ceramic tiles and the grounds, huge lush gardens. The private bath, nearly hidden through a small entrance in the gardens, was absolutely breathtaking. The upper levels of the Alcázar are still used by the royal family making it the oldest royal palace still in use in Europe. Our only critique – the tour of the lower floors is exempt from showing how the royals actually occupied the space. Rather you wander through beautiful empty rooms and must imagine what the furnishings would have looked like. 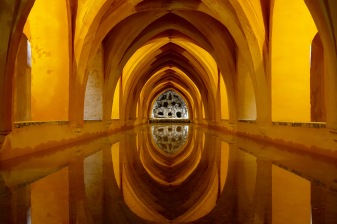 Triana – A lovely neighborhood with its own identity on the western bank of the river. Locals and tourists alike gather on pedestrian streets filled with shops and restaurants. Wandering away from the main street takes you back in time to an area hardly touched by tourism. The best place to buy ceramics and something this area takes very seriously!

Iglesia del Salvador – Absolutely incredible with the most ornate alters and chapels we have seen. The Spaniards take such pride in the incredible decoration, all gilded in gold. Inside are a total of 14 altarpieces, all unbelievably stunning. Get the free audio guide (although mine was set up wrong and the numbers are a little confusing) for a detailed description of what you are looking at.

Palacio de las Dueñas – A little off the beaten path of the high tourist area, this lovely palace was a great place to duck out of the rainy weather. It was built in the late 15th century in the Renaissance style with Gothic and Moorish influences. In the spring and summer the façade is blanketed in purple bougainvillea and absolutely stunning. The museum features a large decorative arts collection and furnishing of the past couple centuries. The gardens are filled with orange streets and the sweet smell of citrus. A wonderful treat in the northern part of town.

Flamenco Show at La Carboneria – After weaving all the way across town, we arrived to a dark alley where La Carboneria awaited and their free Flamenco show (as long as you buy a drink at the bar). Shuffling to our seats at long communal tables, we splurged on the 10E bottle of red wine and sat back to enjoy the show. About every half hour an incredible set of traditional Spanish song and dance is performed. In the beginning the host, a 70 something year old man, pulls at your heartstrings as he bellows the emotional songs of flamenco accompanied by a solo guitar. A couple songs in, the beautiful dancer in her long flowing dress stands up on the wooden platform and begins to stomp and move along with the sounds of the guitar and singer. If you’re lucky, an 80 something year old man will accompany her for a song. Such an emotionally fueled experience in a rustic and memorable location.

Practicing for Semana Santa – We visited Seville about a month before Semana Santa or holy week. Seville is known worldwide for their celebrations, in which enormous platforms or pasos dripping in silver or gold depicting religious scenes are walked by brotherhoods (there are nearly 70!) from their home church to the Cathedral of Seville and back. Some of the routes for the suburban barrios could take up to 14 hours to return!

As we were heading back to our apartment on our first evening in town, we noticed gatherings of people in little alleys all over the place, enjoying drinks and one another’s company. At the alley nearest our apartment, we finally realized what was going on as one of the local brotherhoods were practicing their march with an empty platform. Up to 30 men had to be in complete unison as they slowly stepped up the streets navigating around corners and uneven roadways. We even bumped into another brotherhood later in our stay, as they all stopped by Dos de Mayo for a drink after rehearsal, still wearing the custom padded “hats” needed to support the immense weight of the platform.