After extensively exploring Barcelona for two weeks it was time to head south for some more sun and Spanish experiences. A quick train ride brought us to Valencia where were immediately greeted with festive locals, decorated streets, and the sweet smell of oranges. Fallas (their festival of Fire) was just about to start and the town was getting ready. At every corner block, small children were throwing poppers and setting off fireworks designed only for the loud BANG! Initially we were completely caught off guard by each explosion, but after the first hour of it being such a regular occurrence the noise began to fade into background.

Hungry from our travels but with nothing open for dinner yet, we wandered through the old town and found ourselves on the edge of El Carme. Just inside the modern market place Mercado de Mosen Sorell appeared a wine bar and we quickly headed for the counter. Vinostrum is part wine shop, part wine bar where you can browse from their selection of regional wines and enjoy a bottle at one of their barrel high tops or small counter. A wonderful atmosphere and not yet too crowded, we were able to interact with the chef as she prepared our regional tapas. 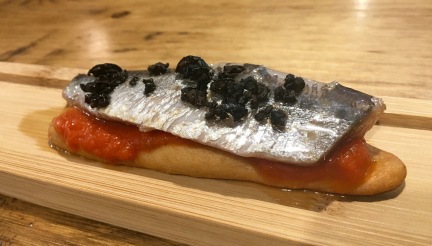 While we had had many little cured fishes in Barcelona the preparation of Vinostrum’s sardines – being slightly smoked while on top of a thick breadstick like cracker with tomato chutney and olives – was extraordinary. Other memorable nibbles included incredibly flavorful canned baby squids which had been stuffed with rice and their own tentacles and topped with lemon crème and an olive oil cured Manchego that was so balanced and seemed to melt in your mouth. By the time we left the place was packed and the lone chef was frantically trying to keep up with the demand. (Vinostrum 2.0 recently opened right outside the door and offers a slight variation to menu items). A great stop and a wonderful first taste of the region.

Rain immediately moved into the area so we were “forced” to dodge in and out of bars while waiting for our dinner reservation at 9:00PM. At each stopped we sampled their offerings  – one, a spreadable chorizo warmed and served with melted manchego, the other goat cheese a la plancha or flash grilled on a cooktop so that a nice crust formed. Both surprising and equally tasty.

It was finally time for dinner and our first taste of Paella in the city in which it originated. 9:00PM was the first reservation available at La Riuà, a restaurant which has been around for decades and is well known to serve the authentic preparation of the dish. Inside, the walls were COVERED with framed photographs, awards, and ceramic dishes and the lights so bright I felt like I was in a doctor’s office. Immediately we order the Valencian Style Paella (served with chicken, rabbit, and large green beans) knowing we had a long wait ahead of us. Traditional Paella is a dish not to be rushed, as it generally takes about 45 minutes to cook. The large pan finally comes to the table around 10:00PM, piping hot and cooked to perfection. Completely satisfied – although not blown away – you could tell the preparation hasn’t changed at all since the day they opened.

The next day was our day to explore the city. We headed to old town, as you do in every European city, to wander the maze of small streets bursting with history. Our first stop was Mercat Central. Like with every other city in Europe, the market is the hub of daily life, social interactions and a window into the area’s culture. At Mercat Central, the patrons and the products were very diverse, ranging from locals shopping for the day, restaurateurs splurging on that leg of jamon, or tourists looking to purchase little authentic trinkets. After many a trip to the local markets in various cities, we honestly feel this was the best one we had visited – large enough to have a great selection of just about everything but not over run with tourists just trying to get a picture of the “strange” regional items. 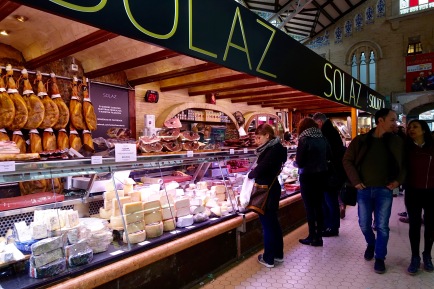 In conversation with the chef at Vinostrum about cheese, she told us about a stand in the market, Solaz, in which they purchase all of their cheese from. We had to make a stop and purchased what looked like a Spanish style boucheron (a French goat cheese that is gooey on the outside while still fresh and creamy in the center). To our disappointment it was not as good as we were hoping, however the selection of cheese was phenomenal and the stand absolutely stunning – if you are a cheese lover such as myself. We paired this cheese with probably the best cured little salami we have ever tasted from one of the many Jamon shops in the market.

Upon leaving the market we happened to stumble upon the daily Mascletà en la plaza del Ayuntamiento. At 2:00PM everday leading up to and during Fallas, this 7 minute gun powder explosion of “varying” tempos excites the locals, filling the nearby streets. A little shaken and quite possibly a little deaf we headed off in search for lunch, taking in the exquisite ancient building which have been preserved so well. Tucked away in a small square in El Carme was Taberna El Olivo, a small local cash only tapas bar.  Seating is outdoors under a big olive tree and their menu is written solely on a chalkboard (a true sign of the type of place we want to eat). We ordered, among other things, the whole Sepia al la Planca and I must say, this may be one of the best dishes we had our entire time in Spain. Cooked to absolutely perfection and dripping with a garlicy herb oil, we instantly devoured the plate, both fighting for the last bite. During our meal we were fortunate enough to strike up a conversation with a couple next to us, Marcos and Anna visiting from Madrid, and spent the rest of the afternoon talking over coffee and wandering the nearby streets. That evening kicked off the local celebration of Falles with the Mascletà de colores taking place at 12:00 midnight. The streets were filled with people out eager to see such a wonderful display, unlike any I’ve seen in the states.

There are two great things to do on a beautiful day in Valencia – Head to the beach and a walk through the park towards La Cuidad de las Artes y las Ciencias. We were lucky enough that the one rainy evening was followed by two beautiful and much warmer days. Heading to the eastern side of town, the beautiful city park is filled with gardens which lead way to the amazing modern structures by Santiago Calatrava and Félix Candela which seem to defy the laws of architecture. Many of the structures are filled with wonderful museums which can be quite costly to enter but you cannot miss the opportunity to just walk around and revel in their beauty.

Our first 80 degree day on this trip (and our last day in Valencia) called for a little bit of beach time! Upon arriving to the port, we were greeted with a HUGE beach and a small strip of restaurants and chain shops. In some spots the sand seemed to extended 200 meters before touching the waters edge. Since the shops and restaurant selection at the port was very limited and slightly depressing, we took a walk down the boardwalk to soak up the sun in hopes we would come across another “commercial” pocket. Along the pathway that seemed to extend for miles, a few beach cafes were scattered but overall a very limited selection along the waters edge. Just a block off the beach, what was once the fishing village is beginning to breathe new life as the younger crowds moves in to revitalize it. It is here where you can get the famous Valencian café Cremaet, an EXREMELY strong and sweet expresso mixed with a local liquor. Getting more sun than our winter skin had had in months, it was time to weave through the old fishing village before heading back into town.

A recommendation from a friend (and nearly ever guide on where to eat near the water) brought us to Casa Montana, a couple blocks away. Sitting in the bar side (to our surprise there are two very different sides of the restaurant) is certainly the way to go for a much more laid back atmosphere. Wine barrels piled to the ceiling were filled with their house vermouth and wine, and antique bull ring posters lined the walls. We felt we had stepped into a saloon in the wild west. A completely unique and enjoyable experience to round out our long weekend in Valencia.

One thought on “Valencia – Fresh Oranges and Fireworks”